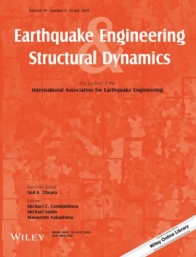 A novel modeling approach for the seismic response assessment of rocking frames is presented. Rocking frames are systems with columns that are allowed to fully, or partially, uplift. Despite the apparent lack of a mechanism to resist lateral forces, they have a remarkable capacity against earthquake loading. Rocking frames are found in old structures, for example, ancient monuments, but it is also a promising design concept for modern structures such as bridges or buildings. The proposed modeling can be implemented in a general-purpose structural analysis software, avoiding the difficulties that come with the need of formulating and solving specifically tailored differential equations, or the use of detailed computational models. Different configurations of a rocking portal frame problem are examined. The model is based on rigid, or flexible, beam elements that describe the members of the frame. Negative-stiffness rotational springs are smartly positioned at the rocking interfaces in order to simulate the rocking restoring moment, while the mass and the rotational moment of inertia are considered either lumped or distributed. Both the cases of rigid and flexible piers/columns are discussed, while it is shown that frames with restrained columns can be considered in a straightforward manner. A simple alternative based on an equivalent oscillator that follows the generalized rocking equation of motion is also investigated. The efficiency and the accuracy of the proposed modeling is demonstrated with the aid of carefully chosen case studies.